The text to include in the 100 Word Challenge this week was ‘..Pink nails?’ she cried. Here’s my offering

The home-school diary read ‘Attended pamper club at lunchtime’. Mum wondered what that meant. ‘What it says’, came back the reply. ‘We do pampering.’ Mum breathed a sigh, at least there was no visible sign of this pampering, apart from maybe a slightly altered hair style. She thought nothing of it until bathtime.

Having run the water with lots of bubbles, it having been swimming as well at school today, it wasn’t until they were getting dry that she noticed. ‘But…Pink nails?’ she cried? ‘Who did this?’

‘I told you, Mum, pamper club’, came back the response from Mark. ‘I like it on my toes’

Filed under Other than school

Today we made solar ovens using empty Graze boxes. Saved having to go to Pizza Hut!

We cut a flap in the lid and covered it with silver foil.

The window that was made was covered in a couple of layers of cling film.

We put black paper on the inside.

Then we put our chocolate buttons on the inside and took the ovens out into the sun. Sadly, it was cloudy and so no melting occurred, but we did get melting when using a lamp instead of the sun. 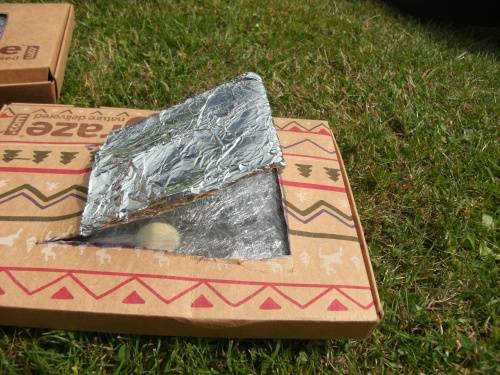 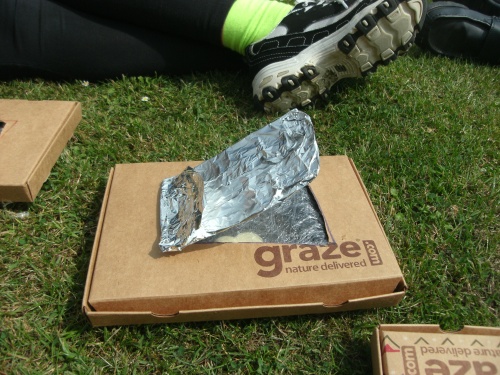 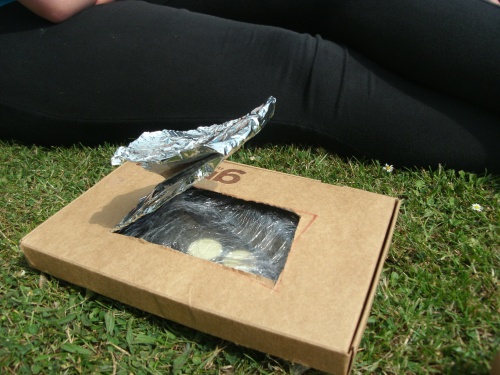 I’ve been doing quite a lot of work with my class over the past 18 months on their fine motor skills. I know it’s probably obvious, but as a scientist now teaching everything, it hadn’t really crossed my mind that improving these would help my class with their writing. It was only when I went on a KS1/2 writing INSET session that it got pointed out to me, and a week later we started our morning workouts.

I have a 30 minute morning registration slot. We take the register, check the date and the timetable and then work on our ‘boxes’ for 15 minutes, four mornings a week. The fifth morning we use iPads and apps which make us use two hands.  I started off using ideas from ‘clever hands’ and modified them over the year in consultation with our OT.

Importantly, each activity is in it’s own box, like the ones you get your Chinese take away in. I found some in Wilkinsons, 5 for £1. The first task for the student is to get into the box! The contents of our boxes and what we do with them are as follows:

My class are independent enough that they are able to organise this for themselves each morning, keeping a note on the chart for who had what each day. Parents have commented how much neater handwriting has become and how much easier pupils are finding routine tasks such as dressing and helping around the house. It’s been a long process, but with input from OTs and patience to stick with it, I’m really glad we are seeing positive results.

This week the prompt for 100 Word Challenge was ‘yellow’, and we didn’t have to use it in our writing.

It’s like picking at a spot you aren’t supposed to scratch. I know what I want, but I don’t know how to get it. I thought I had it, and then you said something that made me not so sure. Now, I’m really not sure.

I’m a coward, I know. I keep checking, just to see if you do want to talk to me, but it seems that you don’t. I know I’m quite capable of talking to you, but I don’t want you to think I’m being pushy. Just tell me, so that I know what the plan is.

Filed under Other than school

A response to (part of) the questions raised here http://betsysalt.wordpress.com/2013/05/29/what-i-wish-teacher-bloggers-would-write-about-more/

‘how do you teach pupils who cannot read or write, e.g. science or history’

I’ve written a lot about my science teaching, so today I shall try and tell you about my ks4 history/humanities lessons. First up, I’m not an expert, second, it’s probably the lesson I enjoy least in my working week, in terms of content, even though it’s flexible.

Meet my class – E, working at p6, no letter formation, mostly echolalic responses, although with support we get there.
A – p7, decodes beautifully, not much comprehension of what has been read
L – p8, recognizes some words, identifies sounds but doesn’t blend. Good recall of content
M – p6, no reading, forms about 3 letters, recall not bad but medical complications make this erratic at times
R – p5, non verbal, no secure signing, always chooses second option
C – p5, occasional words, narcoleptic, no fine motor skills to speak of.

Topics we have studied this term include ‘celebrations – harvest, halloween, bonfire night, christmas’, ‘media – man on the moon’ and ‘inuit culture’.

How do you begin? For the majority of my class, recall is not helpful, so I (along with my TA) concentrate on experiences that match the topic, while providing the chance for those more able students to build on learning each week.

For the celebrations topic we were as hands on as possible. We made spiders in webs, witches hands, fireworks pictures, as well as using the interactive whiteboard to ‘carve’ pumpkins and set off fireworks. We read, each week, a short story on the reason for Bonfire night, and most of the class were able to share that it was because of ‘a bad man called Guy’.

Media. We watched, every week often two or three times, the video of Neil Armstrong walking on the moon for the first time. We asked the same questions each week. We made our own spacemen, complete with jet packs and US flags. We dressed up as spacemen and practiced how we thought it would be to walk on the moon.

Inuits. I found an amazing book called ‘mama, do you love me’ http://m.youtube.com/#/watch?v=wF31cVxhm3o&desktop_uri=%2Fwatch%3Fv%3DwF31cVxhm3o which I had scanned in so we could all see it on the whiteboard. We read it every week, encouraging A and L to read what they could, while E joined in the refrain. The pictures provide a lot to talk about and point to. We each made an Inuit in outdoor clothing, encouraging the verbal pupils to use new words (parka, mukluks). We held ice and thought about why they need warm clothes. We designed igloos from bubble wrap and polystyrene plates and put our Inuit in them. We are going to use stones to build an inuksuk, and plan to make model kayaks. 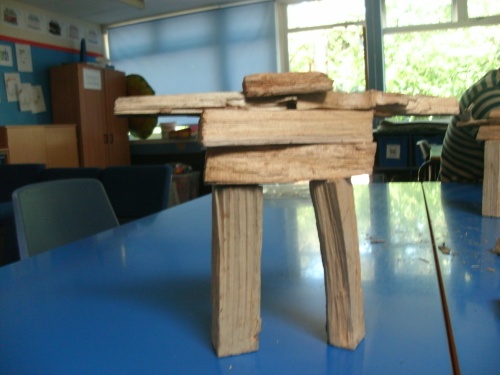 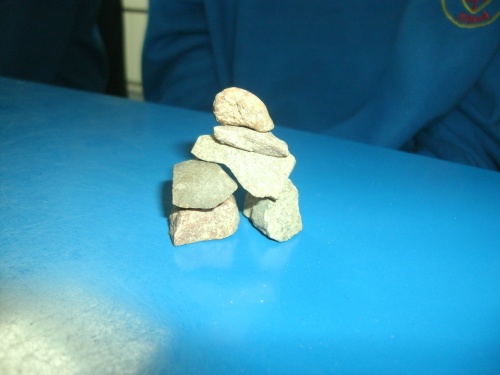 I find it hard assessing my pupils. The verbal ones show progress with support. Careful questioning reveals that some knowledge and understanding has been gained. I struggle with my two non verbal pupils, but they show a desire to interact by completing the activity to the best of their ability, and can, at times, use symbols from ‘communicate in print’ to show their understanding.